Listenbear teaches Children how to bear the unbearable 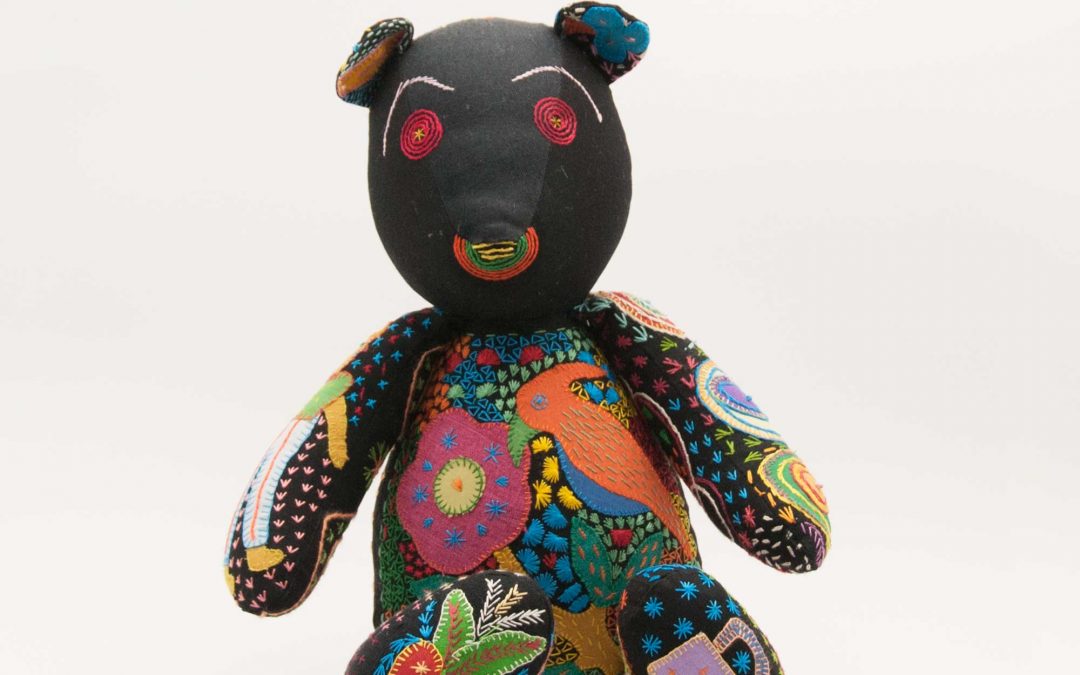 I wrote my first children’s book “Dream it Do it” for my 3 year old grandson. He was the hero of the story about a small kid wanting to win a race ahead of the bigger kids. We laughed, cried and drew pictures of the trials of Kieron and his dream to win the race. Then we raced off and had copies printed at the local copy shop. We set up a table at his birthday party and had a “Book launch” where we handed out ‘signed copies’. This grew into a book a year for him for several years and finally, to a book commissioned for the children’s department at a hospital in Oslo. I found an embroidered bear, made by disadvantaged women in South Africa to accompany the “Listenbear” story. A story to help children bear the unbearable. In it, Listenbear learns a meditation technique based on one I learned from Thich Nhat Hanh – “Close your eyes and smile.” The message that: “Bad things happen, they just do: but you are still you and nothing can take your smile away from you” has hit a cord and the book has been picked up by Save the Children and World Vision International and hundreds of thousands of copies have been distributed to children in refugee camps – most recently for the Syria project.

Listenbear is a hand embroidered bear, made in South Africa. He is the hero of his story. In the book “Listenbear learns the Trees’ Secret” he is told by the old growth trees:

“Bad things happen, they just do…But you are still you…And, No-one can ever take your smile away from you.”

He is taught a meditation technique that is easy and fun: “Close your eyes and smile”

At a Silent Retreat in Italy, that Merle was co-facilitating, she told her students about the power of teaching a child through a story, and how she had written storied for her grandson Kieron. One of her students it turned out, was head of a department at Ulleval Hospital in Oslo, and asked if she would write a story for children who came to the hospital, often traumatized and afraid.

But there’s more…lots more.  This was just the beginning, of the small germinating acorn that would one day grow into a huge oak tree.

Merle spent a year researching material for the book for the hospital.  She interviewed Doctors, surgeons, anesthetists.  She visited hospitals and the burn unit at Red Cross hospital in Cape Town.

She looked for a soft toy for the child to hold while reading the story. This led her to the beautifully, hand-crafted bears, made by refugee women from Zimbabwe. Voila the birth of Listenbear.

In this book she teaches children a gentle, loving meditation practice she learned from the Vietnamese Buddhist teacher Thich Nhat Hanh

“Close your eyes and smile”

The book has been adapted and used by Save the Children and World Vision International.  It has been translated into many languages and distributed in refugee camps where local women make the dolls to accompany the story. It is reported that up to a million books have been printed and distributed

All profits from the sale of Listenbear go towards purchasing new bears to be distributed to children in need.

Next Workshop – 4th to 9th September

Explore the mysteries of the French Pyrenees through writing, hiking, self enquiry excercises and meditation. We will stay in a charming French ‘gite’ at the foot of the Cathars’ sacred Montsegur mountain. Read More